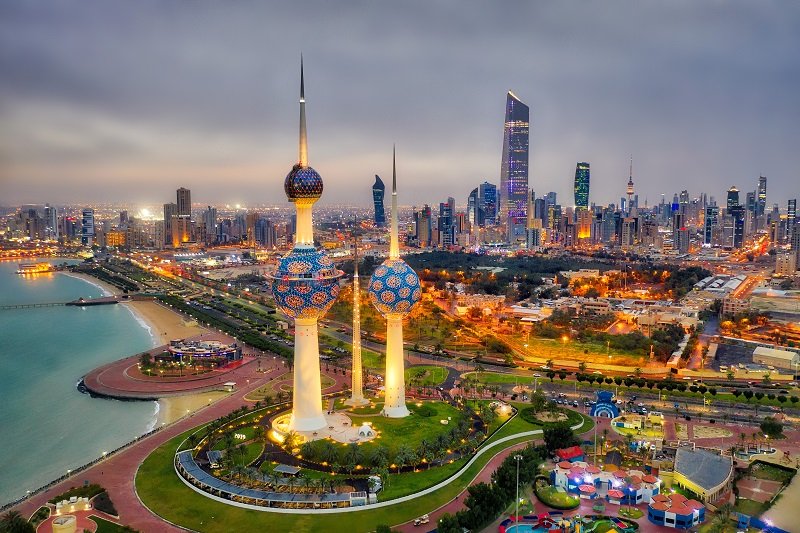 Smart traveller to Kuwait City. Mayor airports in Kuwait. Domestic airports in this Asian country in the Middle East. Is Kuwait safe to travel by foreign national. Woman alone travelling in Kuwait. Safe or not? Travelling solo in Kuwait. Catholic woman alone in Kuwait airport. LGBT people in Kuwait during a travel. Accepted or not.

Kuwait City Airport (IATA code: KWI, ICAO code: OKBK), also known as Kuwait International Airport, is the largest airport in country of Kuwait. Kuwait City Airport has non-stop passenger flights scheduled to 69 destinations in 32 countries in the world. At time of writing this website, there are no domestic flights from Kuwait City.

The most popular direct destinations from Kuwait are following cities in the world. There are also direct flight available from Kuwait City to New York City in United States – this is the longest direct flight from Kuwait City. Direct flights to Munich in Germany, Tehran in Iran, Baku in Azerbaijan, Malaga in Spain, Ahwaz in Iran, Medina in Saudi Arabia, London Gatwick airport in United Kingdom, Alexandria in Egypt, Vijayavada in India, Vienna in Austria, Antalya in Turkey and Sharm el Sheikh in Egypt.

There are much more direct flight available from Kuwait. Flights to Paris in France, Bangkok in Thailand, Milan Malpensa in Italy, Isfahan in Iran, Masshad in Iran, Lar in Iran, Geneva in Switzerland, Dalaman in Turkey, Sarajevo in Bosnia and Herzegovina, Karachi in Pakistan, Bodrum in Turkey, Trabzon in Turkey, Chittagong in Bangladesh, Tbilisi in Georgia, New Jork City JFK airport in United States.

Remaining destinations from Kuwait: Amsterdam in Netherlands, Rome Fiumicino in Italy, Mangalore in India, Frankfurt in Germany, Kabul in Afghanistan, Shiraz in Iran, Guangzhou in China, Manila in Philippines, Kannur in India, Lahore in Pakistan, Kozhikode in India, Ahmedabad in India, Muscat in Oman airports, Thiruvananthapuram in India, Bengaluru in India, Islamabad in Pakistan, Lucknow in India, Tiruchirappali in India, Goa in India, Beirut in Lebanon.

When you land in Kuwait City Airport maybe you want to see some of the country most important tourist attractions. In Kuwait are few great places worth a visit and sightseeing.

Country of Kuwait is an Arabic country. Kuwait is located in the Middle East Persian Gulf. It is a very wealthy country due to enormous oil resources under the surface of the earth in this part of the world. Kuwait have border with Iran and Saudi Arabia. There is many flights available to cities in this countries close by. See above.

If you like to shop, Kuwait is a place to visit. One of the top tourist attractions in Kuwait is shopping. 360 Mall is a nice place to visit after you land in Kuwait. Very luxurious place for shopping. This is area of Al Zahra in Kuwait City. Great entertainment, great restaurants with local and international cuisine. Fantastic top brands shops.
When you there, check the solar garden in 360 Mall. Is a unique beauty of 360 Mall, which has about 21,000 plants that are grown in vertical wall. This has a purpose of improving air and perform the role of bio-filter. Great building in local Arabic architectural elements.

The next stop are the Kuwait Towers. Another architectural beauty and symbol of Kuwait. There are three outstanding high towers, which are standing in Persian Gulf with a great majestic beauty. The tallest tower is 187m high, the small one 147m. The third, smallest tower has an equipment to illuminate the two big towers. Try to see this landmark by night.

Another important tourist attraction in Kuwait is Grand Mosque. It is an excellent model of Islamic architecture style. Majestic buildind, great place to pray and to meditate. Muslims from Kuwait and visitors from over the world gather here during the Ramadan.
Grand Mosque in Kuwait City is one of the biggest treasures of the world. This mosque is biggest in the country and the official mosque of country of Kuwait. Grand Mosque has also the honor to have celebrations and official religion ceremonies during Muslim feast seasons.

Maybe not for everybody but a nice place to visit when in Kuwait is Kuwait’s ZOO. Really top end ZOO with fantastic environment for captured animals. Kuwait ZOO has a fantastic, huge collection of rare animal species. Kuwait’s ZOO contains a total number of 1606 animals, including dangerous animal species. Besides this, rare wild birds are categorized in five different units and each category has at least 12 species. Great place to visit. Never to busy.

Another place worth a visit when you came to Kuwait’s airport in Aqua Park in Kuwait. Located in Arab Gulf Street close to Kuwait Towers. There is 60,000 square meters to explore. Fun for all family while on holiday in Kuwait. Large swimming pools for kids, scuba diving for adults, volleyball courts for youngsters and much, much more. Many fast food restaurants for a quick meal here. Kuwait is a Musllim country, so here are separate mosques for men and women. You can also can get a lunch in local special restaurants located near the park.

Visit in Kuwait is not complete if you don’t visit an American Cultural Centre. It is a great place of art and craft from different cultures in the world. Like Middle East, Asian continent and Far East.
Magic Planet Kuwait is next stop in our quest through Kuwait. If you like an indoor ski, this is the place to came with all family. Magic Planet is the best place in entire Kuwait for family fun and tourism. You can amuse yourself in cosmic digital world of Magical planet. Just take a credit card and some cash for ice cream. Try sky Trail. Any group age will enjoy themself in this place.

Important spot to see in Kuwait is Tareq Rajab Museum of Islamic Arts. Nice museum with over thirty thousand items that have been collected. Items from all over Islamic states in the region, which includes great artifacts and different photographs.
Mirror House in Kuwait is our next stop in Kuwait. This house is said to be the only house that is made entirely with mirror. Many magazines from all over the world has published articles about Mirror House in Kuwait. Book tickets in advance here.

Last stop in our journey in Kuwait is the Seif Palace. Home of royal family of Kuwait. Seif Palace is a wonderful display of Islamic architecture in which tile work has its own uniqueness. Real artwork of this place blows away the minds of visitors. See the watch tower and the golden roofs.

AFTER LANDING IN KUWAIT

There is so many issues regarding airports in Kuwait. And things after landing in the country. Informations about flights delays to Kuwait, flights cancellations to Kuwait. Departures and arrivals. Also travel insurance to Kuwait and question to buy or not to buy a brand new SIM card from Kuwait’s internet provider. Or is it worts to stay with roaming prices with your own mobile provider.

How many terminals have each Kuwait airport. How to travel between them. Map of airports in Kuwait. And crucial questions? Is Kuwait safe to travel by foreign nationals today? Woman alone in Kuwait. Bitcoin exchange in Kuwait. Can i already pay for goods in Kuwait by Bitcoin. How to change Bitcoin or Ethereum to local currency.
Is Uber available in Kuwait? How about Lyft and Blablacar in Kuwait. Designates stopsfor Uber drivers in Kuwait airport. ATM-s and cashpoints locations on Kuwait’s airports.