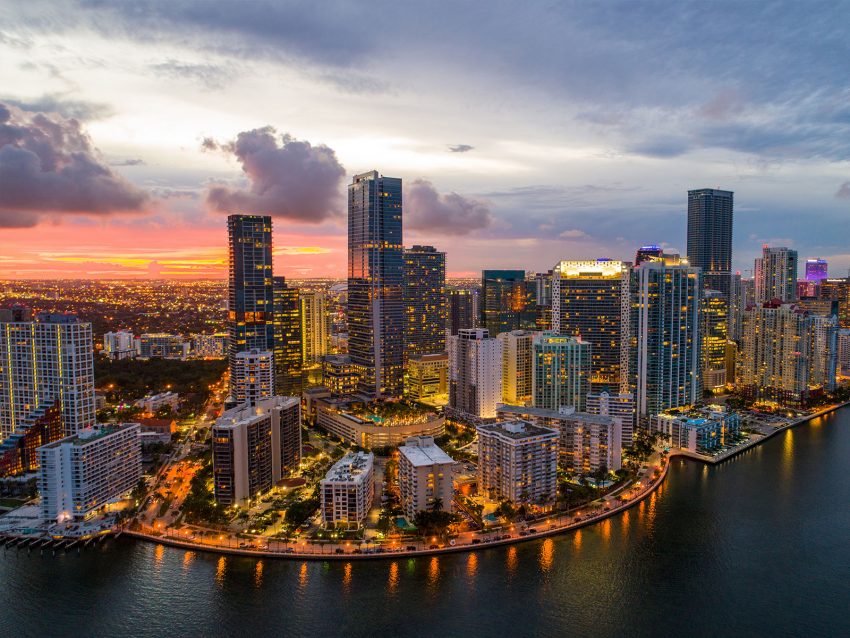 Do you think sometimes about life in luxury full of glitz and glamor? Sometimes watching movies, or photos of luxury residences, apartments, with a hint of envy, thinking that everything is colored by and distant from reality? It turns out, however, that there are places on earth where people don’t just read about these luxury homes, or watch their pictures, but they live in them.

A good example of such a place is Miami Brickell extracted from the urban area of Miami. It’s a district of the city of Miami, which is, in principle, not only the main financial district of Miami, but also a major center for financial and business throughout South Florida. It is no wonder that the condos in Miami Brickell are very luxurious, live here also the shark finance bankers who want to live in such desired location like not others.

In contrast, office rented and luxury apartments is a showcase of many reputable company. In the 70 ‘s of last century, most of the coastal low historic buildings were slowly displaced torn down and replaced by tall buildings with hotels, banks, offices and real estate agencies. Currently, Miami Brickell have permanent population of about 70,000 residents, which is an impressive number. Miami Brickell is commonly called the “Manhattan of the South” and I don’t think this statement is exaggerated.

Florida itself attracts not only tourists, but also people who would like to settle here mainly to its atmosphere, which can not be described, and the great weather, what to emphasize, that can be a holiday throughout the year. In the coldest months temperature does not fall below 20 degrees Celsius, while in summer reaches about 30 degrees Celsius. While on vacation in Florida or in the Miami, you can enjoy every moment of your vacation, so sometimes it is impossible to imagine that such a holiday would last the whole year. But maybe it’s worth the interest and buy here less than or larger condominium and have a chance to vacation at any time of year?

See also chapter flying to Miami to buy a house

Apartments in Miami Brickell, are very luxurious facilities in the United States commonly we says about them “condo “. They are luxurious primarily because of its location, almost on the same bay of Biscayne Bay, stretching along the coast. They also tempt due to its height, in the vast majority, being able to boast breathtaking views of Biscayne Bay and the Fisher Island and Virginia Key in the distance, along with views of the blue Atlantic Ocean. One of the most luxurious places to live is unquestionably Brickell Key. This is the island where you will find high skyscrapers, where housing and apartments are located on one side overlooking the Biscayne Bay, on the other hand on the breathtaking lane of skyscrapers, coming the same luxury apartments.

The most prestigious address in Miami

Among the property for sale in Brickell Miami you will find such a luxury condos, after seeing them you will became speechless. There are, among others, premises with an area of ​​400 – 500 square meters apartment with a huge number of bathrooms and bedrooms, overlooking the bay. Air conditioning is here, you can safely say standard. Guarded parking, gym and swimming pool for residents and more interestingly available round the clock concierge service, who will arrange for you every even unusual case.

Like good view property for sale on the secondary market, such condos in high-rise buildings of 2000-2002 year you can buy for five hundred thousand U.S. dollars, which at this luxury does not seem to be a huge price tag, but the information generally available you can find out that the the luxury of paying no more than $ 1,000 a month, counting all the costs of maintaining the property. Miami Brickell inhabited by many wealthy, but for obvious reasons, those who value their privacy of people who use any part of this luxury.

Miami Brickell is also a modern skyscrapers such even as FourSeasons Hotel Miami, which is 240 – meter skyscraper with 70 floors, the other is 1450 Brickell, 165 – meter high building with 40 floors, and Espirito Santo Plaza and Brickell World Plaza, and the typical residential skyscrapers such as, for example, 160 – meter Jade at Brickell Bay with 48 floors, 128 – meter the Mark on Brickell, as well as dozens of others great buildings.

Views as the movies of Miami …

The financial district is not only banks, offices and other buildings in the financial sector, but also the consulates of such countries as Argentina, Brazil, Chile, Ecuador, France, the Netherlands, Mexico, Switzerland, Peru, Trinidad and Tobago, and the United Kingdom. Miami Brickell is not only great apartments and skyscrapers with luxury apartments located along the coast and the main street Brickell Avenue, but also luxury residences located in low-rise more remote inland.

Miami Brickell is not only modern skyscrapers and residential apartments, but also historic buildings and places like Brickell Mausoleum from 1921 Miami Circle, Dr. James M. Jackson Office 1905 Southside School in 1900, and St. Jude Catholic Church – a church built in 1946, and Fire Station No. 4 located in the building created in 1922. This district also has many parks, beautifying its greenery, this aluminum – glass countryside. These include the Simpson Park, Alice Winwright Park, Brickel Park, Southside Park and Brickell Key Park is located on the island of the same name.

Not only luxury offices and residences in Brickell

Over the last few years, real estate prices in the United States, not only in Florida, have dropped significantly, mainly because due to the financial crisis, the demand for luxury goods, and such unless you can include even a modest apartment in Miami. Therefore, the more it’s a good time for this type of property Florida investment. Americans are reluctant to take loans, particularly so big to buy a 400 square meter apartment with views of Biscayne Bay, because their buyers are mainly Europeans and highly developed Asian countries.

Contrary to appearances, the investment in apartments in Miami, Brickell is a very good investment in the future of both your and your children. So if you are currently lower real estate prices, including those of luxury, this can only mean that over the years, such an investment will prove to be a hit and will add considerably to its value and thus your property .

So let’s think about the pros and cons, imagine gazing out at the ocean while drinking morning breakfast cafe latte and if only your financial resources allow, buy here locale, which will ensure you summer all year round. For sure you will not be bored here among many popular clubs, bars and restaurants, with access to the ocean and hence the possibility of sailing, diving, swimming and other water sports, as well as improvement in the popular Florida playing golf.