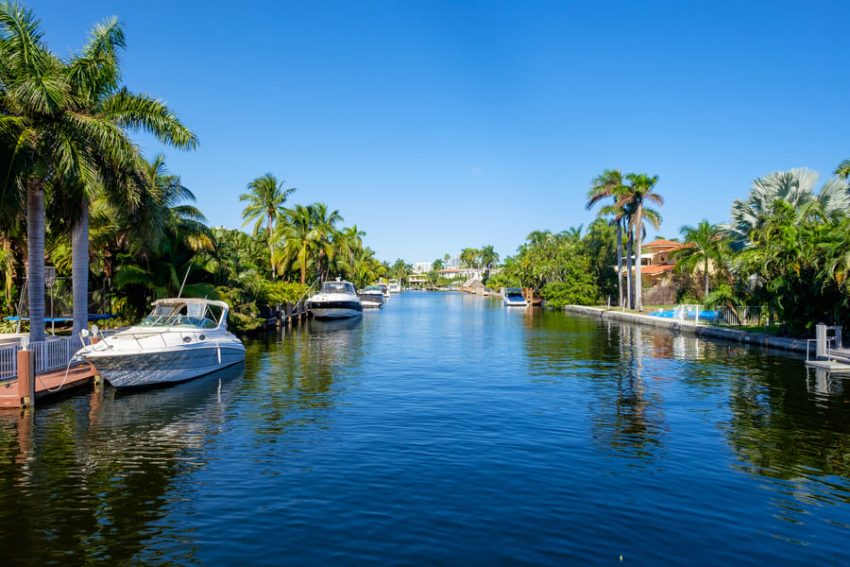 When you look at a map of this place, you’ll see a perfectly divided land between water channels, between the blue strings of the water and glorious buildings. You will find great properties to purchase here, plenty of oportunities to invest intp Florida’s prime properties. Luxury mansions, bank repossesions properties and top class condos, some of them with seaview.

The town of Cape Coral was founded in 1957, when a group of developers bought the surrounding land, where in 1958 they started the development of the city and places close by. This area was called Redfish Point. With the passage of time it dug up a number of channels, streets was paved, more and more houses was built for both residents and business headquarters.

Celebrities were invited to came to Cape Coral and praises his unheard of anywhere else, at the same time, being a living advertisement for the city. In the 1960s, continued development of Cape Coral, in particular Redfish Point. Constructors dug up even more channels, public Yacht Club has been built, a new golf course, a medical clinic, and a nice shopping mall.

Cape Coral have more than 640 km of water channels! Can you imagine it? That’s more than any other city in the world. Most of the canals is designed to sail, and some of them have direct access to the Gulf of Mexico. Cape Coral Canal System was built according to the principles to protect environment of west Florida.

In Cape Coral you will never get bored, even in the winter monts, there is lots of attractions for everyone in this friendly Florida’s city. One of the first tourist attractions is the Yacht Club Community Park. This is the place, which was founded in 1958. The Club is located directly on the Caloosahatchee River and offers a wide range of services and facilities for tourist and for the property owners in the area.

Yacht Club Community Park is divided into several subclubs. The first is the Yacht Basin & Club. Here you’ll find, among other things, a beautiful sandy beach and pier for fishing on the Caloosahatchee River. In the Yacht Basin & Club you can also dock your yacht. Due to the limited number of seats, mooring fees shall be adopted in accordance with the principle of first-come, first-served basis.

Yacht Basin in addition to yachts owners Club & place moorings also provides the possibility of refuelling, and all for all the other tourists provides a beautiful public beach, showers and toilets, playgrounds, barbecue area and picnic equipment, lighted fishing pier, a nice restaurant and tennis courts, and a swimming pool.

The second part of the Club is a Yacht Club Tennis Courts. This place consists of five lit by night tennis courts, open to the public and players came here from early morning to evening. Professional staff is available to help both during the private individual lessons, as well as with regard to any problems in the courts. Even if you don’t have an annual membership card, nothing stands in the way, to take advantage of booking individual lessons of tennis in this place.

People from all over United States come to this part of Florida, this is one of the fastest growing areas in the country, due to the favourable Florida’s climate, the richness of natural areas, as well as due to the possibility of direct contact with fantastic nature, well developed and accessible parks and protected areas, in which the trails for exploring not interfere with natural environment, and allow enjoy Florida’s nature.

In Cape Coral there is a Four Mile Cove Ecological Preserve. It’s an area of typical Florida’s wetlands that can be explored renting out the kayak, but also on foot, after specially prepared tourist routes which runs as wooden walkway. Here you can watch and admire the untouched nature of Florida. You can see eagles, ibises, herons and other migratory birds, as well as the raccoons or snakes.

Since this is a nature reserve, human activity has been limited to the minimum, there is a prohibition coming here with dogs, you will not be able to to jogging here, neither cycling, rollerblading, or skateboarding. Hiking trails lead to the Veterans Memorial, in the South, which consists of several memorials to honor those who served in the American army.

The second natural area worth a visit in this region is Rotary Park Environmental Center. It’s 97 acres of mainly wetlands. Taking advantage of walking trails you can see here: turtles, marmots, exotic lizards, snakes, or a migratory birds.

While the first track is not easy and you need to prepare for changing shoes or dress during this trip, so the second route. Leading built promenade is also adapted for the disabled and allows to observe the mangrove ecosystem to all who come here.

In addition, is worth a visit the Tom Allen Memorial Butterfly House, where you can see beautiful butterflies and plants from these areas typical for Wester Florida.
Children will also appreciate the children’s playground, Liam J. Perk Playground , located in the park. It’s a place where the emphasis is on the education of children , and where adults and dogs can have a good time together.

The Cape Coral is also available SunSplash Water Park. It’s a tropical water park, which features more than two dozen attractions such as sliding in a tube, plain water slides, winding water slides, lazy river, cape fear and much more. SunSplash Water Park invites everyone but especially children of all ages. For kids there are activities that are designed to make them comfortable in the water. The course does not teach children to swim, but tames it with water.

For parents, however, are classes on prevention of drowning. Preschoolers can participate in activities that are a continuation of classes for toddlers. Children are taught behavior on the water, so that they can feel safe and comfortable. You can also enroll your child in swimming lessons and individualswiming classes. Older children can participate in more advanced classes, camps and water. SunSplash Water Park is also a great place to organize events, both closed and available to the public.

There are also places designed for seniors in Cape Coral , belongs to them , inter alia is Lake Kennedy Center. It is a center that facilitates and promotes activities of older people , supports their personal development , offering a variety of programs and activities . Seniors can also choose to meet each other and share with each other interests, passions , develop hobbies, attend lectures, while promoting and maintaining independence and healthy lifestyles.

Cape Coral is a place of luxury , because who would not want to go back home berth boat almost at the door ? Many property is located directly on the river . With private beaches, but also for those who are just passing through is a nice place for moments of rest. Magic ductwork attracts many tourists and people interested in investing in real estate abroad and in this part of western Florida. Also, water sports and sailing in this part Florida is the best. It is easy to buy a house or apartment with access to the water channel in Cape Florida.