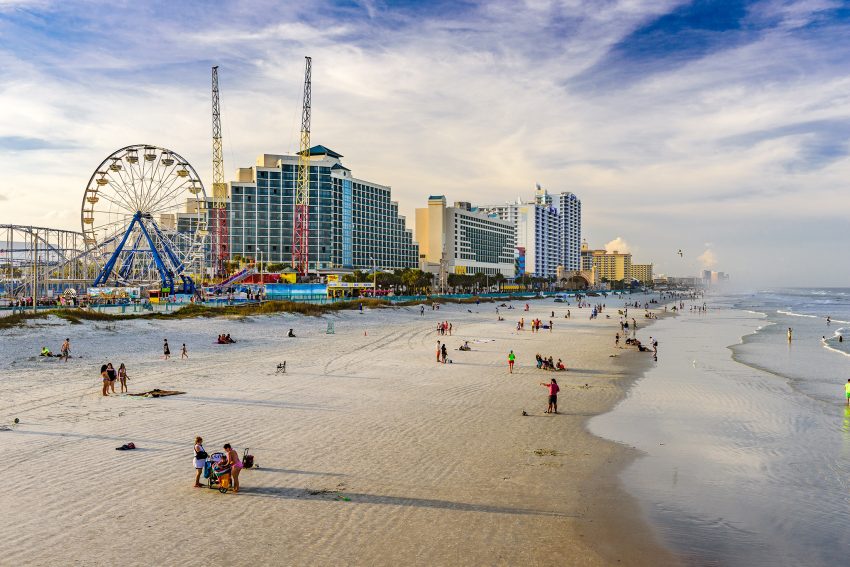 Daytona Beach is a city located in the county of Volusia County in Florida, on the eastern coast of Florida’s and shores of Atlantic Ocean. The place where the city was founded in Daytona Beach, was originally inhabited by the Timucuan Indians, who at that time lived in fortified villages in this area.

Back in 1871, Mathias Day Jr. bought land on the west bank of the Halifax river and built a hotel around which the town was founded. Today is a historic district of Daytona Beach – called Daytona Beach Historic District . Over time, when some financial troubles strick, Day Jr. lost the right to the place, but in honor of his name, town adopted the name of Daytona. In 1926 several neighboring small towns of Daytona, such as Daytona Beach, Kingston and Seabreeze were joined together and all of them were given the common name of Daytona Beach.

Daytona Beach has long been known for great sandy beaches. On Daytona Beach car travelers can enter the very edge of the ocean and can access various other beaches inaccessible in other places on Florida’s shores.
Of course, here too, there are plenty of do’s and don’ts, such as the one that allowed cars to move at a maximum speed of 10 mph.

It’s accessible great beaches and motorized tourists make the city of Daytona Beach has become a mecca of motorsports fans from around the world. Wide beaches of Daytona Beach since 1902 attract motor fans. Also attracted moto testers instructors who tested here their new inventions, especially in terms of performance at maximum speed.

The main attraction here is the automotive Daytona International Speedway. It’s a race track with a length of 2.5 miles, which can accommodate about 130.000 spectators on their stands. The track was built in 1958 by the NASCAR organization from the outset gave fans the opportunity to observe fast automobile vehicles, without reducing their speed. It is here that this race track holds dozens of racing and another events connected with them. It is hosted by organization called NASCAR ‘s most prestigious race.

The Daytona 500 Races take place on an oval track long for 2.5 miles, road or on the track, specially modified, which extended reaches a length of 3.5 miles. The recent renovation of the track used about 50,000 tons of asphalt to line 130.000 square meters of the track. Race organizers shared with guests visiting many attractions and facilities for visitors include special Fanzone.

Which gives you the opportunity to enter the garage, see the cars up close and meet the drivers, and the possibility of meet the entire teams preparing cars for racing in their work. Fanzone provides guests with apossibility to buy a meal as well. After the success of Fanzone at Daytona International Speedway, another Fanzone have been running similar to this NASCAR racetracks.

Now a few words about the history of car race and the NASCAR. In Daytona Beach there is the headquarters of the NASCAR organization whose name is an acronym for the National Assocation for Stock Car Auto Racing. It is an organization, management and body who sanctioning various racing and other events related to the automotive industry not only in United States. NASCAR was founded in 1947 by engineer William France Sr. who observed that people are really having good fun watching the racing cars. Daytona Beach in Florida – great destination.

Car racing began during years of prohibition in USA, when drivers at night deliver illegal booze to bars all over the country. Earned this money to invest in their pimped-up cars to quickly run away from the police and further smuggle more alcohol. When United States abolished the prohibition, the drivers have been with their super fast cars but without the business. Then they began to chase each other, starting betting the money with the odds bets on different amounts of money.

William France Sr. was afraid that the biggest problem is the lack of standard set for the drivers and lack of all the principles and specific calendar championships. He started the conversation with the engineers, drivers and promoters of the drivers on then establish of a formal organization that would manage the race and take care of them in order and respect for the principles of professional car racing.

In the international arena, NASCAR races are very well known and are transmitted by television stations in 150 countries. NASCAR has declared 75 million fans from around the world who are willing to spend an annual total of $ 2 billion on gadgets and events associated with NASCAR races. Impressive, is not it?

City of Daytona Beach is also host to smaller events associated with motor sports such as NASCAR Coke Zero 400, Rolex 24 Hours of Daytona. There are also organized various kinds of motor racing and cycling Bike Week, during which the most famous is the annual show of the Harley Davidson Motorcycle Show and event called Biketoberfest. The city is also the aim of departure of hundreds of high school and university students during a break in the schools, known colloquially as ” Spring Break ” when the time falls to the aforementioned events, such as Daytona Beach Bike Week and the Daytona 200.

DAYTONA WHAT TO DO

But Daytona Beach is not just a racing car town and not everything here is associated with the automotive industry, but this city also have nice museums, galleries and restaurants waiting for every visitor wish to explore this part of eastern Florida. Dozens of historic homes and historic sites are worth a visit in Dayton Beach.
One of them is Mary McLeod Bethune Home. This historic architecture building is simple, two-story house, which serves as a museum and archive documents.

Daytona Beach Bandshell and Oceanfront Park Complex, is another great place to visit in Daytona Beach and belong to National Register of Historic Places in Florida. In 1920 this was named by the locals as a place neglected, requiring fast and high intervention. It has been restored to its splendor and townhall prepared picturesque promenade, which by today’s host concerts and cultural events outdoors.

Also city of Daytona Beach offers for a guests a picturesque Seabreeze. This place is located directly on the beach in Daytona Beach historic district . There are more than 500 smaller or larger historical sites and buildings listed in the register of places of historical importance to the cultural heritage of the United States.

In addition to the historic sites and homes waiting for you in Daytona Beach are also very intresting museums in the town. One of them is the Halifax Historical Museum, which was founded in 1984. It is housed in a building Merchants Bank Bulding, who like many other buildings in the city is recorded in the Register of Historic Places. Here you can admire the exhibits depicting the history ranging from 5000 BC until today. Another museum waiting for your to visit is the Museum of Arts and Sciences in Daytona Beach.

It’s a museum of art and science, which was founded in 1955. More than half of exhibits and exhibitions in the museum is fixed, the other exhibitions change in rotation every few months. Worth seeing, among other very intresting things, are the largest outside of Cuba, an exhibition of Cuban art, Chinese art gallery, as well as regional exhibitions related to Florida. You will find here items regarding the pirates of Florida, slave plantations in northern Florida, contemporary maps and historical maps of the region.

Very interesting tourist destination close to Daytona Beach is City Island. It’s an island on the Halifax River, between the main continent and a barrier island on the Atlantic Ocean. On the island you can visit the historic Jackie Robinson Ballpark – pitch for a baseball game, which was opened in 1914. The pitch is surrounded by a restored 1962 wooden bleachers.

Some gameplay carried out at the site have been moved to another field after 2004 so not to strain the construction field. The stadium is listed in the National Register of Historic Places. City Island is also a treat for those who love communing with nature, here you can find water birds such as herons, pelicans and mammals m.in raccoons, skunks, squirrels and rabbits in their natural ecosystem. Great place to visit with all family.

As you propably know, to enjoy one of the most famous beaches in Florida and the sun, you can come here on foot, come by bike, car or even fly to Daytona Beach. Just remember about the safety on the beach. Although the vehicles driving on the beach have a limited commanded speed and specific areas and sometimes they can’t move because of some event. Despite all they can appear from almost anywhere.

While on the beach just remember to avoid entering the dunes, do not litter, do not disturb the birds living on the water and turtles. On the Daytona Beach is prohibited alcohol consumption and the use of glass containers. Unfortunately, pets are also not allowed on the beach, except guide dogs, of course, kept on a leash. If you want to go windsurfing, there are specially designated areas and times for this sport, so not to bother other users of this great marine pleasure.

If you do not want to explore the historic buildings, walk the Museums and the sound of cars on the beach remind you only race track that you already visit and the next time you do not intend to go back, then you can visit the Ocean Center in Daytona Beach. It’s a multi-purpose facility built in 1985. Is the place where events associated with basketball, ice hockey, wrestling and many music concerts and events are hosted.

Another attraction for the whole family in Daytona Beach is Daytona Lagoon Waterpark. It’s a water park opened in 2005, which is a great entertainment center. It’s open all year and has dozens of exciting water attractions, as well as playgrounds for mini golf fans. The park has a large arcade, which houses dozens of different places for entertainment, arcade games and competitions for adults and kids.

While in Daytona Beach also visit Daytona Beach Pier, which is one of the most recognizable places in Daytona Beach, of course, if we’re talking about non-automotive attractions in the city. Originally pier was built with piles of palm trees and consisted of 600 feet in the depths of the ocean and it was located at the end of Main Street in Daytona Beach.

There are at this point today but in a slightly different form. In 1920, the pier partially burned and four years later it was rebuilt. It currently has 1,000 feet in length, has a functional building in the Victorian style, with ballroom dancing designed for 2000 people. This building hosts a charity balls, weddings and cultural events. Pier is also an attraction for anglers who can go fishing without special permission here, but only on the eastern part of the pier.
For those tourist willing to try delicious and fresh seafood we recommend to visit neighboring restaurant, called Joe’s Crab Shack.