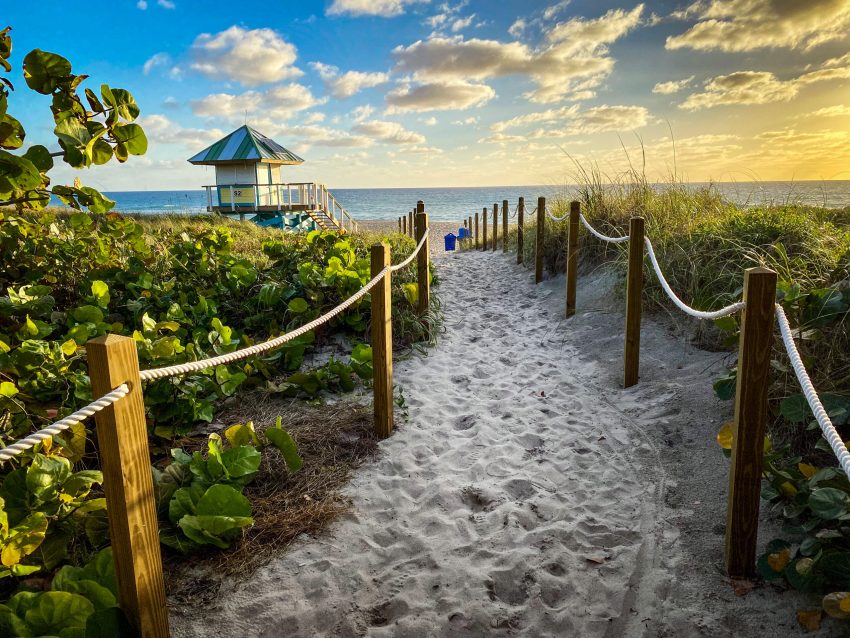 Information and guide to Delray Beach in Florida. One of the most desirable locations to buy property near Boca Raton in Palm Beach County on southern Florida is Delray Beach. Town of Delray Beach is a very “nice” and very friendly town situated on the eastern shore of the peninsula of Florida. Delray Beach is located in Palm Beach county, directly on the shores of the ocean. The city is part of the metropolitan area of Miami – Fort Lauderdale – West Palm Beach. Delray Beach has a great sandy beach and all the facilities to sattle down here and purchase a property in Delray Beach for retirment or as a investment in holiday home in Florida.

Before you start to enjoy our climate and beautiful sandy beaches of Delray Beach, Florida, a few words about the history of this beautiful seaside town in Palm Beach county. In 1895, on the Atlantic coast was a piece of farming community, originally known as Linton, named after U.S. congressman William S. Linton, who bought land here in order to resell deposits from farmers.

Linton and other settlers quickly achieved economic success associated with the production and sale of winter vegetables. In 190 the city of Delray Beach received its current name, derived from the Spanish phrase “Del Rey” which means “belonging to the king.”

A SHORT HISTORY OF DELRAY BEACH

The rapid development of Florida in the 1920s resulted in Delray Beach, success and marked the times of prosperity for this seasise town. With this, the city quickly became one of the most popular places in Florida for families willing to settle here for seasonal residents, to purchase holiday property as well as for tourists visiting Delray on vacation. Also for tourists from abroad.

After that city issued bonds, which funded the water supply, sanitation, paved streets, sidewalks and numerous hotels in Delray Beach. Tourism and real estate in Delray Beach, became the main source of income for city residents and brought prosperity to the town. At that time Delray was the largest city on the east coast of Florida, between West Palm Beach to the Fort Lauderdale.

In Delray Beach there are several points of interest and renovated historic buildings worth a visit. It’s, inter alia, Old School Square, now transformed into a cultural center in Delray Beach. Old School Square is limited to Gymnasium build in 1925, in which often hosts various cultural events, weddings and all kinds of cultural events. The second building, which mind you is the Cornell Museum of Art and History in Delray Beach, established in a renovated old school.

Here you can see six different art exhibitions and one interesting, interactive exhibition designated for children. Here you can see the local arts and crafts as well. Currently, the room is also used in a variety of musical events, as well as the political rallies being carring out here. Visiting Old School Square, we must also mention the Crest Theatre, which presents professionally exposed musicals, shows for the whole family and children.

Being in Delray drop by to a teacher’s home and to the historic Solomon Swords d. The house has been restored and created here Cultural Heritage Museum. It’s a place where you can watch the exhibits, designed to show the appreciation of the efforts of black people who have played major roles in shaping today’s Delray Beach and Palm Beach County. In 2007 the museum was expanded to house from 1935, which once served as small club for children and adolescents.

Previously, the center of Delray Beach, was located along the streets of Atlantic Avenue and Swinton Avenue. Currently, the center has grown from the east coast to the west of Highway I-95. You will find here more than 70 boutiques, unique small shops, galleries, posh restaurants, cosy hotels and smaller accommodation for those with less money.

There are also very expensive hotels in Delray Beach such as Marriot Hotel in Delray Beach. Delray Beach Centre is a vibrant arts scene, nightlife and some of the best restaurants in Florida are located here. Strolling along Atlantic Avenue you can enjoy fine music, even pouring out into the street, starting from classic rock to reggae. This is a great place to spend evening with family or friends, even if you don’t live in Delray Beach and have to travel from Boca Raton or Fort Lauderdale.

Delray Beach has also two miles of beautiful, sandy public beach, which in 1973 was unfortunately flooded by the ocean. Today Delray’s beach has been beautifully restored and expanded and is armed with a security against huge Atlantic waves. Delray Municipal Beach is considered one of the best restored beaches of Florida, which underlines the award received from the American Shore and Beach Preservation Association. Today, small shops and places of recreation has beed build along Delray Beach. This place combines picturesque promenade and beach safety guards include qualified lifeguard on duty.

On the outskirts of Delray Beach, between Boca Raton and Delray Beach you can visit the Morikami Museum and Japanese Gardens – the center of Japanese culture and art in southern Florida. Here are Roji – Japanese Gardens, a bonsai garden, gift shop and cafe called Cafe Cornell. You can be here to witnesses Japanese tea ceremony, which takes place in the main museum, as well as participate in the celebration of the traditional Japanese holidays. Park and museum got its name from the name of the owner of the farm, which was forwarded the county Palm Beach County, for use as a park – George Morikami.

Being here you have to make sure to visit the mentioned before Roji – Japanese Gardens, which consists of six gardens that represent different stages in the development of Japanese gardens, Shinden Gardens – age 9-12, Paradise Gardens – age 13-14, Early Rock Gardens, Rock Lately Gardens, Flat Gardens and modern Rock Gardens – a modern romantic garden. It is a fabulous place ideal for a family walk and to spend here nice afternoon.

On the outskirts of Delray there is also Wakodahatchee Wetland Park, covering 50 acres of wetlands. Unused land utility has been transformed into wetland ecosystem, which is the place of recreation open to locals residents and tourists visiting Delray Beach. Wakodahatchee Wetland is a good example of how people give something good to the nature. Marshy areas and small islands are connected by a wooden bridges.

In the park you can sit on one of the many benches or gazebos, which is very easy to observe the surrounding nature. The park counted about 150 species of birds, including the black belly whistling, snowy egret, billed grebe. In addition to the birds you can find here alligators, turtles, frogs, rabbits and raccoons. The wetlands are growing in large numbers od fauna such as sabal palmetto palm trees and other plants typical for Florida.

Would you like to take a break in Delray Beach or to visit this place in search for dream real estate in Florida? You must visit the Colony Hotel, where they crossed the threshold. You can feel both the historical atmosphere of the place, as well as a modern approach to customer service. The hotel was built in 1926, crowned it with two domes, like the Mediterranean architecture.

Arrayed in the lobby are hand-made wicker furniture and terrazzo combination of red, oak floors and neat interior, with soft music in the background, provide a unique atmosphere of this great hotel in Delray Beach. Colony Hotel is located on Atlantic Avenue, near many restaurants, art galleries and entertainment venues. Two miles from the hotel you can visit the Colony Cabana Club, which together with the Hotel are objects of historical entered in the National Trust for Historic preservations and Historic Hotels of America.

Colony Cabana Club has 250 feet of private beach, a heated saltwater swimming pool, changing rooms and showers, also towel rental, and parking for motorized tourists. There are held here monthly party nights of the full moon, lasting until dawn. In addition, the club offers dozens of events held on the shores of the ocean.

Delray Beach is an attractive destination not only for tourists but also for people willing to live here permanently. You can choose eco-houses, condos, suites, apartments, bungalows on the beach for singles, for families with children, seniors, everyone will find something for themselves if they choose to live in this beautiful area of Florida. The temperature in combination with a refreshing ocean breeze provides excellent climatic conditions and may want to think about finding your best place to live and to purchase property in Florida.