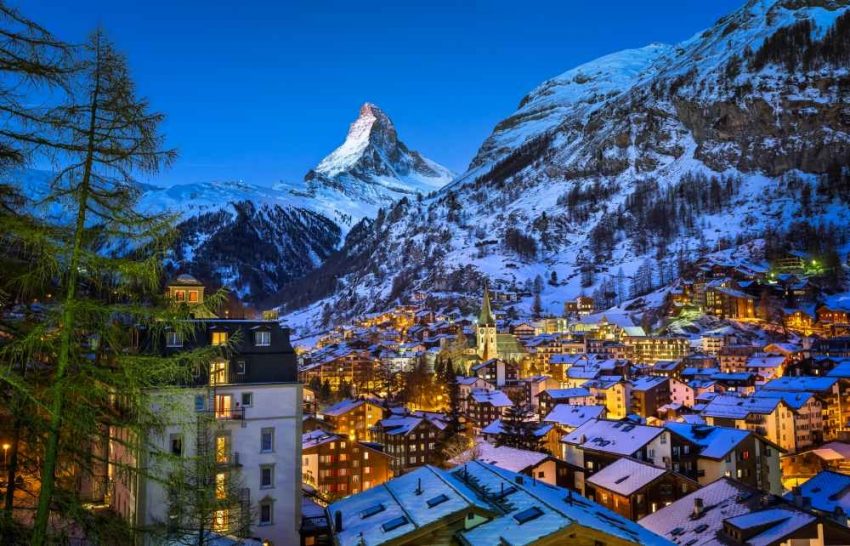 Switzerland is one of the most popular country to travel in Europe, despite high prices of accomodation, hotels and food in Switzerland. Fantastic mountain resorts, great ski faciities and high quality of life bring here milions of tourists every year to Switzerland cities and airports. More the 40% of population of Switzerland is a foreign origin. Country is very well connected by great airports and also train links to another European countries such a France, Germany or Austria.
Save 30% on travel to Switzerland. Rent a car Switzerland, hotels and cheap tickets to Switzerland. Hotels, cars, tickets Switzerland

Switzerland is not only known and admired in the world by expensive watches, secret banks and swiss knifes. There is to much to explore and see in Switzerland. Winter and summer is great to travel and to cach a cheap flight to Switzerland. There are also great casinos in Switzerland – a paradise for gamblers.

There are many flights connections from Switzerland to many countries in any continent. Below are all flight connections from Switzerland Airports to the outside world. Direct flight to Dresden in Germany, Birmingham in United Kingdom, Marrakech in Morocco, Toronto in Canada, Orlando in FL United States, Dalaman in Turkey, Heringsdorf in Germany, Graz in Austria, Oslo in Norway, Varna in Bulgaria, Los Angeles in United States.

Another destinations from Switzerland international airports are cities in the world: Moscow Sheremetyevo in Russia, Beijing Daxing in China, Stuttgard in Germany, Ljubljana in Slovenia, Preveza in Greece, Gaziantep in Turkey, Bordeaux in France, Milan Malpensa in Italy, Wroclaw in Poland, Mauritius, Buenos Aires in Argentina, Bodrum in Turkey, Zanzibar in Tanzania, Hanover in Germany, Muscat in Oman, Billund in Denmark, Nis in Serbia, Calgary in Canada, Guernsey and Paphos in Cyprus.

There is more destinations and flights available from Switzerland main airports: Reykjavik in Island, Phuket in Thailand, Philadelphia in United States, Tallin in Estonia, Phuket in Thailand, Philadelphia in United States, Tivat in Montenegro, Havana in Cuba, Bremen in Germany, Nairobi in Kenya, Dubrovnik in Croatia, Agadir in Morocco, Sal Cape Verde, Marseille in France, Lyon in France, Pula in Croatia, Figari in France, Bilbao in northern Spain.

There are more important threads regarding Swiss airports. Travel insurance to Switzerland. Which one to choose from. Also if you travel from outside Europe, propably you will need a new SIM card to your smartphone if you intend to stay longer in Switzerland. American or Canadian phones could be useless here in Switzerland after arrival.

If you arrive on one of the airports in Switzerland. Most propably to Zurich airport or Geneva airport, there are very important tourist attractions to visit. Country is realtivly small so in 10 days you can see all the most important tourist spots in Switzerland.
Good idea to start from Alpine most famoust resorts. St. Moritz is one of the most famous Ski resort and Alpine village. This place is must-have on your list of things to do in Switzerland. St. Moritz hosted two Winter Olympic in the past. Town is located 1800 m above sea level and is split in two parts. St. Moritz Dorf and St. Moritz Bad. Try the Cresta run if you came here during the winter months.
To much to do here: for the tourist wait here activities such as snowboarding, skating, bobsledding to tobogganing. In summer time: great mountain hiking, mountain biking, and water sports in local swimming pools. Go also to the nearest glacier.

After arrival on Swiss airport visit capital city Bern on the river Aare. Here you can start from great museums and galleries in the city. Make sure to go to the Zentrum Paul Klee gallery, Bern Museum of Art – Kunstmuseum. Next visit medieval old town of Bern. Gret for a londg stroll or to gat a break for a nice meal in local restaurants or coffe shops. Old town of Bern is UNESCO World Heritage Site.
Visit tallest catedral in Switzerland. Have a glimpse on Zytglogge medieval clock with moving puppets. Do some souvenirs shopping in Lauben galleries along the main street. Also visit Rosengarten.

Next one stop in our travel through Switzerland is Matterhorn – an iconic peak in Switzerland, symbol of the country and one of the highest mountains in the entire Alps in Europe and Switzerland. High of 4,478 meters above sea level. Visit town of Zermatt on the foot of the mountain. Charming city and world class ski resort. Even in the summer this is a great place to experience Swiss Alps in full glory. Nice, elegant shops, butiques, cafes and restaurants. Plenty of accomodation include hotels, B&B, luxury apartments and hostels for skiers.
There are no cars in city centre to preserve clean mountain air.
In winter there are available 300km od ski slopes to choose from. Great ski lifts. Ski schools and great slopes for experienced skiers. In summer try hiking, mountain walking and mountain biking. Also tennis courts are available in Zermatt and swimming pool. Try summer glacier skiing in Zermatt.

Lake Geneva is one of the Europe’s large Alpine lake. The city of Geneva is also nice place to visit during winter and summer. Don’t miss in the city centre Jet d’Eau the fountain. Visit Opera House and Grand Theatre. Do nice shopping in the Geneva. Not to far away are two nice Swiss cities to explore: Lousanna in Montreux – the city where Freddie Mercury spend his final days and die here. There is a nice statue of Freddie Mercury right on the lake bank in Montreux. Visit also casino close by. Each summer there is Montreux Jazz Festival with international audience.
Lousanne have a great medieval city centre worth a visit.

On the way back or if you arrive on Zurich airport and start you journey in Switzerland is a great city to spend here at least two days during your trip to Europe. Zurich is located near Lake Zurich and the river Limmat. Huge cultural hub, fantastic museums, great shopping, expensive watches, banks and swiss knifes. First visit old town of Zurich, then have a nice meal in one of the restaurants here. Go to Bahnhofstrasse – the best place in Europe for upscale shopping, watches and fine jewerly. 50 museums and more the 100 art galleries to explore.
On the top of the list is Kunsthaus Zürich fine art museum in Zurich, then is Rietberg Museum and Swiss National Museum. To finish sighseeing of Zurich, get a train to Uetliberg Mountain.

The Rinne Falls close to German border. The Rhine Falls (Rheinfall) at Schaffhausen are the largest falls in Central Europe. Viewing platforms are nice or take a boat tour here.

There is much more to see in Switzerland. The most important places to visit after landing in Switzerland’s airports are: Swiss National Park in Engadine Valley with border with Italy. Another isUNESCO World Cultural Heritage listing – the Albula Bernina train line – fantastic views. Oberhofen Castle on the Lake Thun. The Ruinaulta – Swiss Gran Canyon. Lake Lugano and Ticino. Chateau de Chillon near city of Montreux. City of Lucerne. Interlaken most popular Swiss summer resort. Jungfraujoch – the longest glacier in Europe.