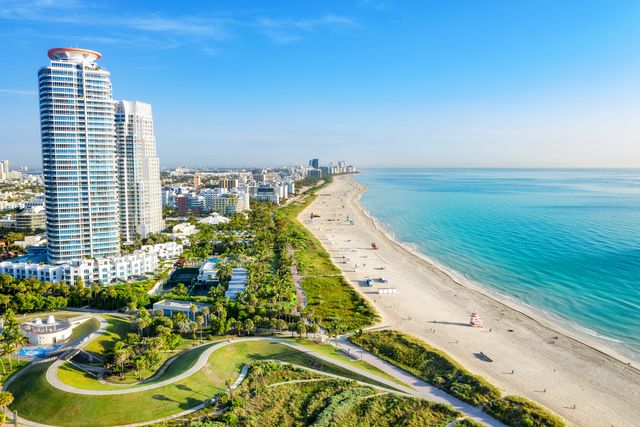 Overall, Florida can be divided into two climatic zones slightly differing by temperatures and climate. Northern zone of subtropical climate, and the region of South Florida with a tropical climate. It is overly simplistic thinking, but it will be easier for us to understand climate of Florida. Florida is the sunniest and warmest state in the United States. The difference in temperature between the northern and southern part of Florida are most noticeable in the winter months when the northern Florida is experiencing some cooler days and nights, while South Florida has a very high temperature.

In the summer, spring and autumn in Florida feels very high humidity with particular intensity in the months of July and August.
Then it is the warmest and most humid in Florida. Sometimes the humidity reaches 97% or more. It should be borne in mind air conditioning, when you book your hotel or accommodation at this time in Florida. Without an efficient air conditioning during this period is very difficult to deal with, thinking about successful vacation in Florida or finding and buying real estate in this hot U.S. state. Maybe you should think about organizing trip to Florida in the winter, when the temperature in Florida is lower, and the hot climate of Florida can not be so so difficult to bear.

In summer, the most troublesome are the high temperatures in South Florida in locations such as Miami or Key West. Key West is the most southerly part of Florida, and also the hottest part of Florida. North Florida is a little cooler and more to withstand in terms of humidity. Summers in Florida are very long and very hot. In fact, we should say that here is an eternal summer. Summer temperatures in South Florida are at the level of 30 ° C to 38 ° C. Florida is the warmest in July, August and September. Then later on, temperatures slightly falling.

The period from late spring to early fall in Florida is characterized by high rainfall. This rain may occur during the day, literally out of nowhere. These types of storms are coming in the form of short storms and very heavy rainfall, where after a few minutes the burning sun comes out again. This kind of a cool shower, is a vast relief during a very hot and humid summer reigning in Florida.

If you experience high temperatures and very high humidity in your travels, and a tropical climate such as the nearby Yucatan Peninsula, Mexico, in the period from April to November. This impression as heated “sauna” in South Florida is quite the same. Hot air is heated and very humid. In particular, the feeling is intense, like a blow of hot air after leaving the plane (actually from the airport) at the airport in Miami or Fort Lauderdale, South Florida.

However, if you reach south Florida in the winter months from Europe or the United States or Canada, you will be amazed by the fantastic weather, high temperatures and the possibility of swimming in the sea or in the ocean in the winter months, prevailing in the northern hemisphere. We encourage you to visit Florida in those months during the year to experience the wonderful Florida climate and what the local lifestyle have to offer, dictated by the climatic conditions prevailing on the peninsula in the vicinity of Cuba, the Bahamas and the Caribbean.

Winter in Florida is much drier, but it is still very hot. In the months from November to May, there is much less rainfall. This time of the year is called: dry season in Florida. The average annual winter temperature in Florida, oscillate between 20 °C to 24 °C.

But often it happens that the temperature reach 26 °C or more. A little colder in the north of Florida, and is often heard in weather forecasts on TV, that sometimes there are frosts at night. So if you plan to visit northern Florida, area near Tampa and Clearwater, better bring along on a trip, a light jacket or sweater in cream color …

South Florida has warmer weather and the surprises do not happen. Snow almost never happens in Florida, but as the story goes in the north of the Florida, in town of Panhandle, once occurred snowfall. Also, in the northern city of Jacksonville experienced snowfall in 1989.

The spring months in Florida and in the autumn, it’s the longest periods of sunshine and high temperatures, of course, except for the summer in Florida. The sky is clear and cloudless, the air humidity is less burdensome. There are showers, but this is uncommon phenomenon. It can be said that during this period temperatures oscillate between 25 °C and 29 °C.
It is generally beautiful weather, perfect for a holiday, going to the beach or explore the attractions of Florida from Key West in the south to the north of Jacksonville, Florida.

When to go to Florida? Tourists from all over the world visit Florida practically any time of the year. Winter and spring are particularly popular for families wishing to visit the theme parks in Orlando and surrounding areas, where summers are way too hot to visit Disney World and Sea World in Orlando. Disney World and Orlando is in the middle of the peninsula, therefore, does not seem to make it any cooler, because there is no sea breeze.
In summer, there are still more highly. At that time, golf courses in Orlando and to the visitors to the theme parks in Orlando may be too burdensome. Also for families with children. But the choice of the period to travel to Florida is up to you.

The season for hurricanes in Florida runs from June 1 to November 30. This is an official dates, but it happens rarely indeed that haunt Florida hurricanes outside this period. The most likely time for hurricanes, according to U.S. statistics weather is month August and October.

An extremely intense hurricanes, tropical storms combined with gusty wind, when the wind gust speed often exceeds 100km/h. Hurricanes form over warm ocean waters and occasionally are guided towards the land, causing loss and huge damage to property and infrastructure. In the past, hurricanes cause even the loss of human life and the terrible destruction of the infrastructure of Florida.

Hurricanes are formed mostly in the tropical areas of the Atlantic Ocean and the Caribbean Sea, and mostly move north. At that time, moving towards land and the cooler water, they lose their power. Hurricanes tend to be lighter and the stronger. It’s then worth closely monitor the weather in Florida and be on guard and prepare well yourself and your property from being hit by hurricane. A large part of the property that we have in our portfolio of properties for sale in Florida, has security windows in the form of special shutters and special hurricane resistant windows. Also roofs in South Florida are usually protected from hurricanes.

If you are going to Florida during the hurricane season, you should keep an eye on and check the weather. Always check the current weather in Florida, as well as long-term weather for Florida. For this purpose, it is worth to visit the website of NOAA (National Oceanographic and Atmospheric Administration) National Weather Service, whose task is to early warning from hurricanes haunting southern Florida. During your stay in Florida you also will became familiar with National Hurricane Center.