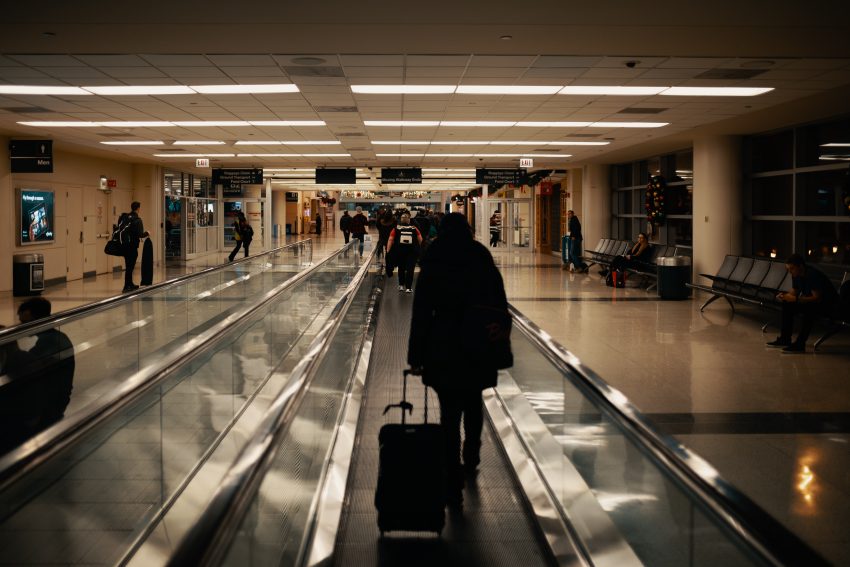 Rent a car and hit the road. It’s best idean to rent a car in the United States, immediately after landing on any airport. It’s to me the most convenient form of transportation in American continent. It’s difficult to live and work here without a car, not to mention visiting the USA as a tourist.

Rent a car from Airport here

When you get to the car already in the U.S., you’ll soon see how excellent roads and highways are in the United States. How well are marked all the highways, and just how great looks like road communication in the United States. Driving the U.S. by car is a real pleasure, you just need to be patient, because the distances here are vast, and the distances on maps and road signs are of course given in miles. But soon you will get used to it and certainly with verve you move on their way.

In the close vicinity of each highway in the United States there is well developed hotel infrastructure, there are plenty of restaurants, bars, fast food, lots of fast food bars, and practically every few miles on the way there is a place for rest or spend the night on the road. This we can envy the Americans. This is a fantasticly resolved and developed in the US. Altought recently the new goverment said the US is allready well behing the China regarding the infrastructure, bridges, highways and public transport hubs.

Parking lots in the USA are large and wide for great cars and limousines, well-marked, there is little way streets and car parking is done without stress and even an inexperienced driver can handle yourself well. You’ll appreciate it and you will know it as soon when you start to travel U.S. by car.

MAYBE A TRAIN OR A BUS

In addition to the car after in U.S. you can comfortably move around by bus or train. Legendary Grayhound bus lines, known from so many American films have bus connections to virtually anywhere in the USA. AMTRAK trains also will take you to all the major cities in the United States, from Mexico to Canada. While traveling by train seems to be a more expensive option for the traveler from Europe.
Booking places in a train in the U.S. for longer distances, it looks like booking an airplane. The closer the date of departure of the train, the train ticket became more expensive. It’s worth remembering that before booking train tickets in the USA. Best to check ticket prices on rail AMTRAK website.

So what are you waiting for, go soon as you can to get U.S. visa, pack your bags and plan your life’s journey to the United States. For sure you will not regret this decision, and the experience so new and so charged, good, with positive energy, which empower you in the USA. This is at least my personal opinion, after so many trips held throughout the United States, Canada and Mexico.

The largest city of the U.S., on the east coast is the city of New York, the legend and the town immortalized in so many films, television and cinema, and you feel that you know this town allready when you arrive there. This city, in my opinion, is the capital of the western world, and perhaps the entire world …. You definitely need to stay in New York and explore this magical city by yourself. To feel the positive energy of the Big Apple will absorb you completely.

Other biggest metropolises in the U.S. is Los Angeles, situated on the west coast of the USA, on the list is full of Poles – Chicago, Dallas -rich south, beautiful and modern Houston in Texas state, Philladelphia on the east coast, Washington DC the capital of the United States, and finally enchanted Miami in Florida, located on the eighth place in terms of the number of people in the United States. It’s also great American city and perhaps you will visit Miami landing in one of the Florida’s airports.

In the south of the country is the city of Miami, Florida, which is sometimes called in some tourist guides capital of the Americas, South and North. Great tropical city in US.
A little smaller cities are Boston on the east coast, Atlanta in Georgia and San Francisco, California. Next on the list of largest cities in the United States ranks modern Phoenix – Arizona, on the city of Detroit, which last so many times in the media in recent time and the city of Seattle on the west coast, near the border with Canada. The remaining several million U.S. city, are also very important in terms of economic and tourism are: Baltimore, San Luis, Tampa Florida, San Diego, California and city of Minneapolis. See also Clearwater in Florida.

The official language in the United States is English, but upon arrival to the United States you will realize how many languages ​​is spoken by people here. Not only in Miami or Los Angeles you will communicate with ease in Spanish, but also in New York and Chicago you will find a lot of people and places where signs are in two languages: English and Spanish. So feast of languages​​, not just English.

The third most widely used language in the United States is a Chinese language, and actually Cantonese and Mandarin, which is a language primarily spoken in Hong Kong. But the west coast of the U.S. has a large population of Asians and here, if you know Cantonese or Mandarin, you will surely travel easier, provided that English is not your favorite language.

GERMANS ARE NUMBER ONE

More than 600,000 people in the United States declares knowledge of the Polish language, according to the official statistics, which provides Wikipedia on the internet. So it also means something as important and significant in the U.S. should be Polish community in the United States. Is it so? That’s we will leave to your own opinion…. The fact may say something Poles living and working in the U.S. for years ….

America is a behemoth, a huge and diverse country, which can not be described in one chapter in our guide the United States. It behooves actually write a book about USA, guides the individual states, because here every state it actually like another country. When traveling to the U.S. when crossing the borders of each state, are for tourists just off the highway, places so-called “Welcome Center” a tourist information of the well-trained staff.

They will give you not only information about attractions in state you are travelling to, but also a free state maps, maps with marked tourist attractions and plenty of leaflets and folders, what to see in the state where sleep and where to eat. It’s worth stopping for a coffee and take advantage of this “Welcome Center” and visit the top attractions of the state. This is provided that you have the time and willingness to explore the area.

Canada to the north is a much “calmer” country …. I would say that … more “English”. USA is more “wild ” and more crazy. Canada is much quieter and calmer, is the first thing that strikes after crossing the US-Canadian border. No coincidence that the head of Canada is Queen of England, it ‘s a little digression, which is designed to show you how the United States differs from its neighbors.

Rent a car from Airport here

Mexico, while in the south, it is so beautiful and rich in culture of the country, but the continuous illegal immigration from Mexico to the United States, crossing the border and drug cartels dominate the information in the media and spoil relations between the two countries. But that’s a story for a separate, long and exhaustive article about Mexico on the American continent. Because it’s also America, please do not forget about it while travelling to the United States …