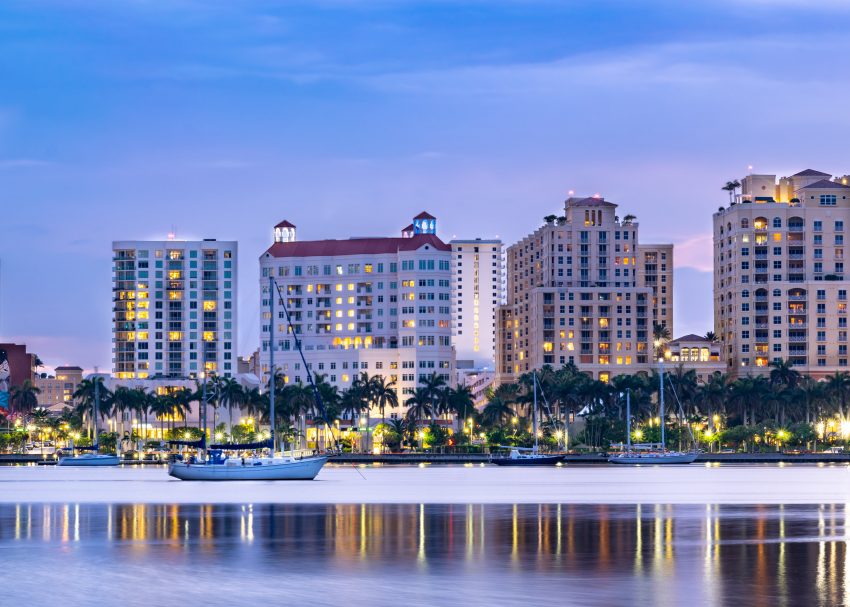 Palm Beach is a city in Palm Beach County lying on the east coast of Florida. It’s the easternmost point of the peninsula of Florida. Palm Beach was established as a resort by famous person in Florida’s history – Henry Flagler. An American entrepreneur who, among others, contributed to the development of the railways in South Florida and made economically flourishing state of Florida in the USA.

LITTLE ABOUT THE PAST

The city gained its name in connection with the very intresting history associated with the Spanish sailing ship called “Providencia”. Which sank in the surrounding waters and after that the beaches were filled with coconuts transported by the sailing ship. In 1911, when Palm Beach was chartered, the island was real palm grove.

Associated with the founder of the city is the palace of Whitehall, and museum bearing his name – Henry Morrison Flagler Museum. Luxury House Whitehall, which Henry Flager built for his third wife, Mary Lily Kenan. Construction was completed in 1902 and then marriage moved here for good. Built with pomp could without problems compete with extravagant mansions in northern United States, but unlike them, it was built around farm buildings, or auxiliary buildings.

Paradoxically, Whitehall was the last residence of Henry Flagler, who as a result of injuries sustained after falling from a marble staircase in 1913. He died at the age of 83 years. Four years later, died also Mary Lily Kenan, and the building was taken over by investors who are in the most cases deprived areas Whitehall nature. In 1959, the descendants of Henry Flagler saved the building from complete devastation, bought it and opened the aforementioned museum in Palm Beach.

Today, Whitehall is incude into the National Register of Historic Places, and the museum visit millions of visitors annually from around the world. The museum is unique monument to the events that took place in the early days of the city. Florida’s history is inextricably tied with Henry Flagler, so his last place of residence, is a museum in itself. And also place worth a visit while in Florida.

The museum has in its collection of dozens of original furniture and art collections from Flagler’s time. Tourists are offered an audio guide, so you can better understand the history of this place. Also, children are prepared for special attractions. Among other things, the game – fun, a bit like a treasure hunt, which ends up getting awards.

Directly related to the Henry Morrison Flagler is Breakers Hotel, formerly known as Palm Beach Inn, also appearing in the National Register of Historic Places of Florida. The hotel was opened by Henry Flagler in year 1896. In 1903 partially burned, hotel was rebuilt and reopened in 1904. Unfortunately, 12 years after the death of the founder, in 1925, fire destroyed once again part of the hotel, turned out to be a faulty electrical system, which has been repaired, along with all of the hotel in December 1926 and since then, the hotel operates until today.

To this day you can visit the hotel to book a room and feel yourself submerged by historical atmosphere of the place. Today, the hotel and its surroundings are 140 acres of some of the most beautiful sites, located directly on the Atlantic Ocean. It is precisely because of this hotel, Henry Morrison Flagler founded the West Town – West Palm Beach, where they had to settle hotel staff and service. The city is situated a short distance from Palm Beach. Just past the bridge.

Curling up in a tiny Palm Beach is also necessary by every traveller to choose a trip to West Palm Beach. Town of West Palm Beach. Which is the capital of the county of Palm Beach County, offers sights and cultural activities for everyone regardless of age. Norton Museum of Art, Palm Beach Zoo, Rapids Water Park, or adding an injection of adrenaline Lion Country Safari, are just some of the proposed attractions worth seeing. Not to mantion selecion of great restaurants and pubs.

Returning to Palm Beach, if you like to commune with nature, you should visit the Four Arts Gardens, also known as the Four Arts Library, Gardens and Philip and Hulitar Sculpture Gardens. These are the Botanical Gardens, opened in 1938. Temporarily after the hurricanes in 2004 gardens were closed, renovated and re-opened even more beautiful in March 2007. You can admire tropical plants endemic to the peninsula of Florida, and a beautiful Chinese garden, where you will meet beautifully made ​​statues.

Alleys and paths around rock gardens leading to the buildings, they are made in the Spanish style, which looks extremely climatically. The gardens are full of exhibited sculptures by artists such as Lawrence Holofcener, Luis Montoya, Leslie Ortiz and many others. It is the perfect place to escape from the Florida’s heat and take a walk. Currently gardens are managed by Garden Club of Palm Beach.

City of Palm Beach also has other monuments not directly related to the founder of the city of Henry Flagler. One of them is Villa Mar-A-Lago, included also in the National Register of Historic Places. The house was built in the years 1924-1927, in honor of Marjorie Merriweather Post. After her death, the villa and the 17-acre plot was given to the government of the United States.

So far, Mar-A-Lago has hosted dozens of events organized, inter alia, by the International Red Cross, as well as the American Red Cross. Since 1985, the property is owned by property tycoon Donald Trump, who has since been renewed 58 bedrooms and 33 bathrooms. Notable guests in the villa were, among others, in 1994, during his honeymoon month was Michael Jackson and Lisa Marie Presley.

PALM BEACH NOT ONLY FOR MILLIONAIRES

However, if you would like to spend moments outside of historic buildings, waiting for you is Worth Avenue, often referred to as the Rodeo Drive of Florida. It’s an elegant shopping district located in Palm Beach. The first mention of the shopping area dates back to 1918, when the rising rents caused the traders moved to the south and is here opened their first stores.

The oldest existing store in the shopping district of Worth Avenue is open since 1923. But of course there is no shortage of modern, trendy restaurants, art galleries and boutiques. You will meet here shopping brands such as Giorgio Armani, Louis Vuitton, Tiffany & Co., Gucci, Chanel, Lacoste and many more.

This district also serves on various events related to the inclusion of the Christmas lights, festive decorations, as well as less traditional, often surprising events such as the parade of poodles and other small animals. Great place to by after the holiday season.

However, if you come here to enjoy the hot, blazing Florida sun, there is nothing in the way of spending time only using the beauty sunbathing. The beautiful sandy beaches of Florida are inviting every visitor from all over the country. Often the beaches of Palm Beach are mentioned in guidebooks as one of the best and most beautiful beaches of Florida.

Beaches of Palm Beach stretching along 47 miles of sandy coastline, which is home to dozens of hotels and restaurants in the town. Many of them are located directly on the water, and with them directly are beaches filled with sun loungers. With staff waiting to meet the needs for a pleasant rest of your guests. Private residences on the coast also have their beaches, which unfortunately you will not enter atleast you are resident of Palm Beach.